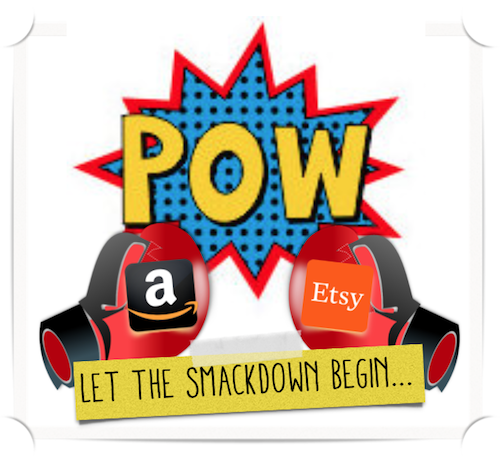 Etsy Vs. Amazon Handmade: Let’s get ready to ruuuuumble!!

In the red corner, a website founded in 2005. Weighing in with 1.4 million active sellers and 19.8 million shoppers, it’s Etsy — defending their title as the currently undisputed handmade marketplace champion of the entire Interwebz.

In the blue corner, an emerging subsidiary of the largest Internet based retailer in the United States. Weighing in with the force of the 7th-highest Alexa page ranking (that’s an internet popularity meter) and more than 244 million customers to market to — it’s the challenger — announcing, Amazon Handmade!

It’ll no doubt be a fight to the finish. Who will emerge victorious?

It could be anyone’s game.

While Amazon and Etsy’s CEO’s are likely to don proverbial boxing gloves, it’s clear that there is about to be a serious rumble underway between the two companies. If you haven’t heard yet, Amazon has announced intentions to launch their own take on a handmade marketplace set to compete directly with Etsy. There hasn’t been any word yet about when the site will launch, but some Etsy sellers have already received an email from Amazon inviting them to preview the new program.

A few years ago, Amazon may have struggled to entice sellers away from Etsy. Prior to drastic changes made to the site’s policy in 2013, Etsy was more than just an e-commerce site.

Sellers considered Etsy to be a community, a place where artisans and artists could sell their wares and works of art, inspire one another and give each other tips for success.

In fact, many sellers were able to make full-time incomes from their sales on the site, and you didn’t have to search long to find success stories about seller after seller in Internet search results.

Do a search for Etsy news now, and you’ll see a dramatically different story. It began in October 2013 when Etsy tightened seller restrictions and allowed factory-made products to be sold on the site, provided they were “unique.” What followed was a flood of low quality items from overseas factories.

Long-time sellers saw traffic to their pages and orders plummet as the new overseas sellers undercut their prices. Message boards became abuzz with complaints, and there have been countless articles and blog posts from sellers lamenting the current state of Etsy.

With the state of Etsy presently, the time truly couldn’t be better for a competitor to emerge, and it seems that Amazon Handmade will be that competitor. While it would likely be difficult for a brand new site to be a serious threat to Etsy at this point — Amazon might just have what it takes. After all, Amazon’s brand is known around the world, and if the company can manage to lure enough frustrated Etsy sellers away, they could recreate the sort of site that Etsy once was.

The fight between Amazon Handmade and Etsy will likely go longer than 12 rounds, but it will be interesting to see if one can take the other out with one swift knockout punch.

What do you think about the idea of Amazon’s new Handmade site? Could they give Etsy a run for their money?

Are you a supporter of the Maker Movement? Why does it matter? Share your thoughts in the comments below…