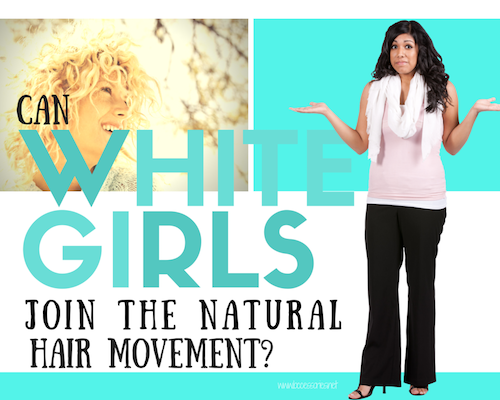 When you think of the natural hair community, images of beautiful Black hairstyles come instantly to mind. To most people, the term ‘natural hair’ is synonymous with Black hair, but is the movement really just for Black men and women? The Inquisitr published an interesting article on the subject, and the infamous CurlyNikki post had all of the the natural hair community up in arms so it seemed, inspiring me to delve a little deeper into the idea…

The Differences Between Black and European Hair

There are obviously differences between European and Black hair, and dermatologists and biologists have studied this topic extensively. European hair tends to be denser with a large number of smaller, finer strands, while a full head of Afro-textured hair will have fewer hairs that are coarser. The coarseness of Black hair makes it more likely to form curls and kinks, and also gives the hair a larger surface area for evaporation. As a result, Afro-textured hair tends to be much drier than Caucasian hair.

Despite the differences between European and Black hair, White women with naturally curly hair can face many of the same challenges as Black women. For decades, the going trend has been for sleek, smooth, straight hairstyles, which has led many White women to seek hairstyling extremes and professional straightening treatments and to use flat irons on a daily basis to remove curl. This can leave European hair severely dehydrated, leading to problems with frizz and poor manageability. Many White women with curly hair are now taking cues from the natural hair movement and are deciding to show off their curls and waves instead of straightening.

European Hair and the Perm

The permanent wave has been a hairstyle that has come in and out of fashion for White women. Like relaxers for Black women, permanent waves can dehydrate the tresses and cause severe damage over time, not to mention the adverse health effects of perms as well. White women who like the look of curly hair are now starting to investigate new ways of getting the look the natural way. One method of enhancing curl without heat or chemicals, is wearing twists and knots, typically natural Black hairstyles, set in wet hair and allowing it to air dry. When the twists and knots are removed, European hair is full of body and curl.

While it’s true that Caucasian women’s hair does not have the same cultural significance as Black women’s, if you step back and look at the natural hair movement as a body-image positive movement, there is definitely room for White women in the community. Women who are tired of subjecting their hair to damaging heat to remove curl or undergoing perms to perfect waves can make the choice to go natural and show off their hair the way nature intended.

Like Black women, White women who are shifting to natural hairstyles will need the right hair care products to improve manageability, and some ethnic hair care products like curl enhancing creams and lotions can be beneficial for European hair too.

What are your thoughts on White women and the natural hair movement? Share them in the comments down below, I’d love to hear what you think…