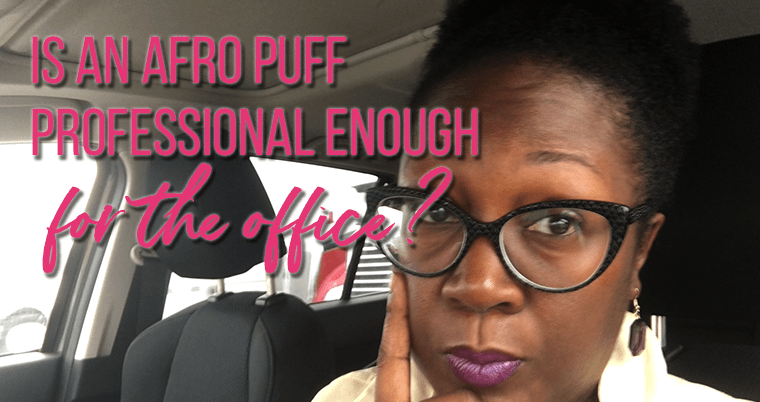 Is An Afro Puff Professional Enough for the Office?

Since returning to being a loose Natural after 11 years of being loc’d,  I am rediscovering different things to do with my hair and ways to wear it out and about, to work, and in various other daily activities.

I think of myself as a simple loose Natural. Meaning, I don’t fuss with my hair a lot and I usually keep one style for the week. I don’t do too much to it beyond a daily moisture spritz & seal to prep and wrap it before bedtime.

In essence, I use the K.I.S.S. method when it comes to my natural hair regime. (I have a little more fun on the weekends though).

So I was intending to put it up in a chignon last night but stopped short of that when I glanced in the mirror and caught a side profile of my full-out Afro puff in all of its glory. And the look actually gave me pause…I liked it. I wasn’t expecting that…

BUT, surprisingly, it also brought up some other feelings that I was not expecting and was not ready for.

I guess you could say I’m caught between two worlds…new school and old school thinking. The majority of me is determined to accept me as is, no apologies…especially when it comes to my hair.

But if I’m totally honest, there is still a small part that rehashes the old, discriminating thoughts as to the degrees of overall “kemptness” of kinky, curly hair.

Questions quickly started running through my head like ‘is this OK?”,  ‘is it too much?’, is it too ‘out there?’ — basically, will it draw too much attention to itself? I work in a pretty small office and the boss is fairly conservative. I’m the only one that looks like me in there…so anytime I do something different with my hair it’s a new experience for the people in my office even though it’s pretty normal for me and that got me to thinking…

Natural Hair Hangups: Why All the Fuss? …A Brief Look At History 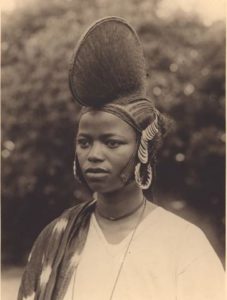 Our hair is an integral part of our history, in more ways than one. Before colonialization, afro-textured hair was prized, donned in elaborate hairstyles by African women and even African men. Different hairstyles could tell you about a person’s social status, religion, clan, among other things. If a woman’s hair was unkempt for any reason, it was to signify a period of mourning. Regardless, the point is, black hair was not seen as less than, or with any subliminal meanings attached to it. In fact, as with most other cultures, it was a source of pride.

When the slave trade was in full swing, it was common for slave traders to shave off the head of Africans to humiliate them and strip them of their identity. Due to the long, grueling and dehumanizing hours that they were forced to work, quite naturally slaves had no time for their hair, and even if they did, there were no styling tools fashioned for afro-textured hair as they had back home in their native lands.

Ayana Byrd and Lori Tharps in their book, Hair Story: Untangling the Roots of Black Hair in America write that some African slaves used sheep fleece carding tools to take better care of their hair but this resulted in infections and breakage. Hence, they resorted to covering their hair for lack of better options.

Slave masters also preferred to keep slaves with “good hair” for house jobs. This led to some slaves using lye soap or lye and other mixtures to straighten their hair in hopes of looking neat enough for house jobs. Although house jobs were just as tedious as field jobs, they were deemed somewhat better.

This continued into the post-emancipation era when blacks had to straighten their hair to blend in and not have “slave hair.” Slave hair as you can imagine, was characterized as short, kinky and unkempt.

It’s shocking to discover how far the system would go to degrade black hair. In the late 1800’s, there was actually a “law” in colonial Louisiana which prohibited women of color from wearing their hair out in public places. Can you believe it?! They were ordered to cover their hair because it was seen as a threat to white women. Although it was not an official law, the governor at the time made the guideline which was part of the ‘Edict of Good Government’ to be punishable to the full degree of a law.

The edict was made to downplay the attractiveness of black women and separate women of color from their white counterparts.

“The distinction which exists in the hairdressing of the colored people, from the others, is necessary for same to subsist, and order the quadroon and negro women, wear feathers, nor curls in their hair, combing same flat or covering it with a handkerchief if it is combed high as was formerly the custom,” a section of the edict reads. [source]

However, this rule is known to have backfired as the black women made quite a show with the pieces they used to cover their hair.

This clearly shows that natural hair was often stigmatized as either not ‘neat’ or ‘too much’ and this message has been transferred from generation to generation both directly and indirectly. This explains why many black women feel the need to look “presentable” and not stand out where a white employer or predominantly white gathering is concerned. And you will see that the stigma of curly hair extends beyond people of African descent, you can witness threads of disdain across any ethnicity, even its own as witnessed here.

Is an Afro Puff ‘professional enough’ for the workplace?

What I mean by that is to acknowledge hair as being just hair and not weighed down with so many meanings, assumptions and associations.

Big and fluffy or kinky and coily doesn’t mean unkempt, and it doesn’t mean political or confrontational, it simply means not straight. Period. 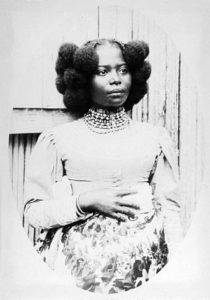 Honestly, when contemplating wearing my puff to work what I felt initially was fear. And that simple fact bothered me. I didn’t like it and reaffirmed silently to myself that I refuse to apologize for my hair or hide its texture. I woke up the next morning, fluffed my puff and went off to work. I’m confident that I made the right decision.

Although I do believe in workplace appropriateness (the old school part of me coming out). For example, I wouldn’t expect a bank teller or law clerk to sport multi-color hair and I’m not rolling in to work with booty shorts on. The simple notion that hair texture could or would be associated with an individual’s capacity to do their job is simply ridiculous. I won’t take part.

In case you were wondering, the day was rather uneventful. No one commented on my hair. Even though sometimes they do…and when it happens, I normally just chalk it up for the team (#teamnatural) and try to keep the conversations surrounding the novelty of my hair brief and lighthearted. But in this case, I didn’t have to. The day came and went, and I had a small victory for self-esteem. Yay!

Do you have concerns about whether or not natural hair is professional? Do you ever question your hair style choice and it’s office-appropriateness?

Tell me about it in the comments below and how you dealt with it. I’m listening…

Black Women Speak About Natural Hair Bias in the Workplace